An audio-visual and highly interactive walk at the neighbourhoods of Kerameikos/Metaxourgeio in Athens to discover parts of the city we were unaware of.

The Onassis Stegi-Athens and Soundscapes Landscapes create a nexus of stories in the city of Athens. Artists who work in sound and images explore a new form of digital art-mapping in downtown Athens neighbourhoods and invite us on a real-time stroll through Gazi, Kerameikos and Metaxourgeio.

Kerameikos, along with Metaxourgeio, has a special intensity. It has been a living, meaningful space since antiquity that seems to weave and encapsulate the entire course of Athens through time: the cemetery, the train lines, the factory at Gazi, Kerameikos, Iera Odos and its night clubs, the edges of Metaxourgeio, multiculturalism, the development and gentrification of the area, immigrants, artists, night venues and clubs, alternative cultural spaces, tourists, and the Acropolis’ rock overlooking the area.

Cosmopolitanism and localism, national and European identity, pockets of resistance, modern Greeks and immigrants, tradition and modernity, an industrial area, and a working-class neighbourhood.

The project Soundscapes Landscapes / Rhizome ΙΙ reveals the stories that take place on the city's surface as well as those that are hidden away or underground or in its past. Put in your earphones, download the app onto your smartphone or tablet, and navigate the city.
A project at the intersection of art, technology, audio research and field recording which also provides a gateway into the anthropology and sociology of the city through its interviews and real-life stories, soundscapes, compositions and poetry.

Click here for the online app which allows you to create your own walk.

Click here to read the instructions for downloading the app.

Soundwalk App by ZKM
The app is developed in partnership with the Onassis Stegi and Medea Electronique as part of the Interfaces Project. Co-funded by the Creative Europe Programme of the European Union.

We also thank the poets who gave us permission to both use and record poems of theirs:
Zissis Ainalis, Kostis Gardikis, Thomas Kiaos, Giannis Stigas

The walks of Soundscapes Landscapes / Keramikos / Metaxourgio are in both Greek and English.

The soundwalks are available in Greek and in English

in collaboration with:
Medea Electronique
http://medeaelectronique.com 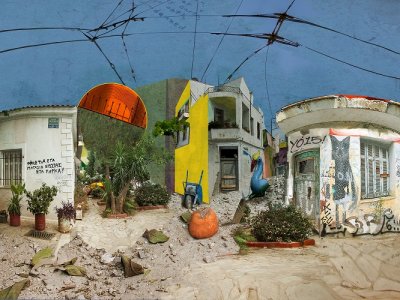 Soundscapes Landscapes | About 3 rhizomes and an installation (trailer)